The BMW owned by the Protestant Christian and chief columnist for Berlin tabloid journal ‘B.Z.’ was burned out.

FAZ claimed responsibility for the Berlin attack in a letter posted on the far-left internet platform indymedia.org [since removed]. Schupelius was criticised by FAZ for upholding Christian values and supporting the pro-life movement March of Life.

The feminists claim that Christian charity ‘applies only to those who submit to the concept of heteronormative worldviews’ and that Schupelius was targeted because by expressing biblically based views he served ‘as a spokesman for racists, right-wingers and reactionaries in all fields’.

Their claim described Schupelius as ‘more than a slime bag that embodies the reactionary’. They claim his journalism is ‘propaganda texts [which] are intended to further public opinion towards Christian, patriarchal social order’. They concluded their letter with a clear threat: ‘Gunni, since this is already the second warning, we would strongly recommend that you change your job.’

They revealed the journalist’s home address, stating that he ‘lives there with his children’.

Protestant and Catholic bishops condemned the attack in a joint statement: ‘We are shocked and outraged by the violent attack against the journalist Gunnar Schupelius and about the threats against his family.’ Noting that freedom of expression and human rights are the greatest asset in the country, the bishops said: ‘We strongly condemn all acts of intimidation and violence against dissenters.’ Schupelius himself has said that he enjoys an exchange of views ‘in the sense of an intellectual debate’. Even when such a debate creates friction at the ‘discussion level’ there is no need for animosity. Unfortunately, the perpetrators left the discussion level far behind with their arson attack.

Regrettably, Schupelius considers freedom of expression in Germany to be endangered: ‘In my opinion, the willingness to deal with dissenting opinions is decreasing, so much so that one has to ask oneself whether there can still be a meaningful public debate at all.’

Leftists claim represent values such as tolerance and the right to express opinions, but Schupelius said: ‘It is really a paradoxical situation. These are people who claim to be fighting for the right thing. This includes tolerance towards dissenters, but they don’t believe in that.’

The Feminist Autonomous Cell do not confine themselves to arson attacks on Christian journalists: they also claim credit for attacking churches and their vehicles.

A few days before the Schupelius attack, on December 27, several activists belonging to FAZ vandalised the independent evangelical church TOS Ministries. Several masked people set on fire a minibus owned by the church and sprayed the entry area of the building with purple paint. Police said the attack resulted in damage amounting to 40,000 euros. 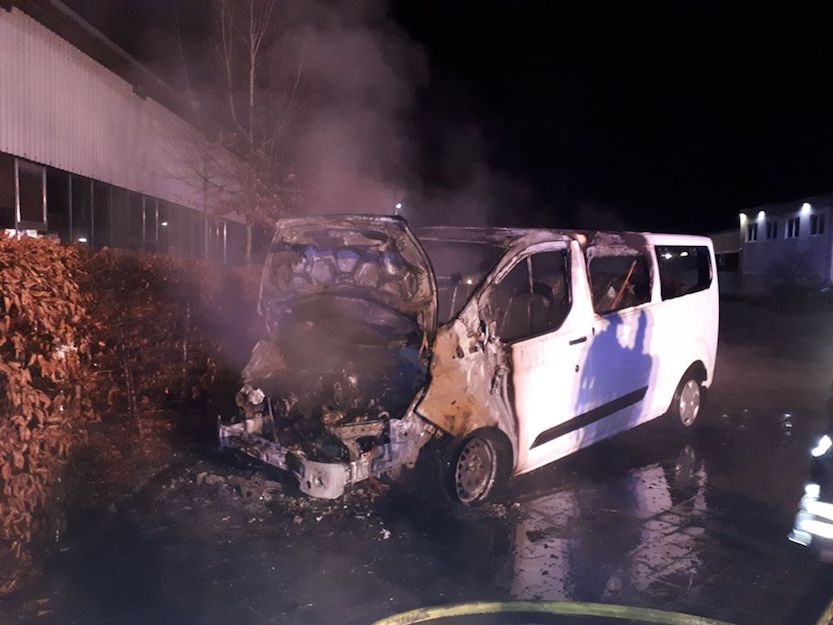 TOS is a charismatic Protestant church and ministry based in Tübingen, southern Germany. Founded in 1990, since 1997 it has planted 12 churches, five different prayer ministries, four children’s homes in Latin America and a centre for drug rehabilitation in Eastern Europe.

On January 2 FAZ claimed responsibility for the attack in a lengthy online letter published by indymedia [since removed]. The police believe the letter to be genuine.

FAZ explained their motives: ‘While most are recovering from the pre-Christmas consumption frenzy and the days off are happily sitting around a sawn-off and plastic-covered tree, we, a feminist autonomous cell (FAZ), have decided to use this symbolic and pleasantly quiet time to take action.’

The group justified their violence by accusing the church of having anti-feminist and homophobic attitudes, of promoting a patriarchal system and of having a colonialist world-view. The group also mentioned that this was not the first such attack on a TOS church, saying that feminists attacked the Leipzig branch in spring 2018.

Guido Kasch, pastor of TOS Church in Tübingen, said on Facebook: ‘We are shocked by this attack, but unfortunately not surprised in view of the increasingly hostile climate against evangelical Christians. In recent months we have seen aggressive threats against TOS church in Tübingen, especially from the left-wing scene.’

Such attacks are becoming increasing common in Germany. On December 6 four Munich-area churches were daubed with slogans such as ‘Burn the churches down’ and ‘Neither God nor master – destroy the patriarchy’. The damage was estimated at thousands of euros.

During the night of 8 and 9 January, the historic St Elisabeth-Kirche in Berlin-Schöneberg was vandalised with black and white paint, the words ‘Pro Choice’ being sprayed on the Catholic church’s doors.

According to the feminist vandals, the church’s support for the March for Life was unacceptable because it served as platform for ‘fundamentalist, anti-trans, homophobic, anti-Semitic, misogynist, patriarchal and right-wing conservative’ speakers. Further, they called the institution of the church ‘inevitably connected to the patriarchy and thus with an inhumane ideology’.

This is the new reality for the church.